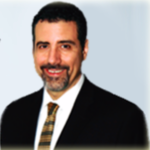 He earned his Juris Doctorate at St. John's University School of Law in 1988.  He began his legal career in Atlanta, Georgia in 1989 as an associate attorney representing personal injury plaintiffs, workers' compensation claimants, and plaintiffs against insurance companies for insurance policy breach of contract claims.  In 1991, after the trial of an insurance policy breach of contract claim in the United States District Court for the Northern District of Georgia, he was offered a position as an associate attorney by the counsel for the opposing party at that trial.  He eventually accepted that offer and became an associate attorney for that insurance defense law firm where he represented insurance companies in first-party insurance contract litigation and subrogation litigation for recovery of property and casualty losses.  He became a member of the subrogation department at that law firm, where he represented the interest of insurance companies against product manufacturers, product distributors, contractors and subcontractors for property damage losses, which included national civil litigation in United States Federal Courts where he was admitted pro hac vitae in those jurisdictions.  His subrogation litigation included claims against product manufacturers and distributors of defective and dangerous products and claims against general contractors and subcontractors for defective and dangerous construction.

In 1993, he opened his law practice devoting his practice primarily to the representation of injured workers and personal injury victims.  His experience in representing the interests of insurance companies has proven to be invaluable with respect to the representation of workers' compensation claimants and personal injury plaintiffs and has allowed him to broaden his practice to claims against building contractors for negligent construction and insurance companies for breach of insurance policy contracts.  He witnessed firsthand the institutionalized policy of many insurance companies to delay, deny and underpay claims made by their own insureds.  His experience in working for the "other side" has reaffirmed what he had believed since he made the decision to become a lawyer: that the interest of the rich and powerful must be met with tenacious and committed representation on behalf of the average American.  His commitment to his clients is his primary focus.

About Joseph A. Maniscalco Jr.

Thank you for contacting Maniscalco Law. A member of our legal team will be in touch with you momentarily.

Please complete all required fields below.

GET A FREE CASE EVALUATION

Each Maniscalco Law workers' compensation or personal injury client starts with a call. Our legal team reviews your case and helps you determine the next course of action. Contact us now, we're here for you.